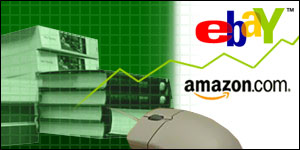 Ebay has won far more new visitors than Amazon. The online auction site eBay has overtaken Amazon.com as the most visited e-commerce site, according to a Nielsen/Net Ratings report. The data shows that eBay’s audience grew by over four million during March to 22.13 million.

Visitors to Amazon, which has consistently been in the number one spot as the most widely used internet shop, only rose by one million. This leaves the book and compact disc store marginally behind eBay with 22.08 million viewers in March.

According to the report, eBay is also stronger than Amazon on page views and the average time spent on the site.

Ebay is also much more profitable. The popular online auction site is one of the few dot.com companies to make money, and has done so from the start.

In the first three months of the year, eBay defied the gloom surrounding internet stocks and reported a ten fold increase in profits. During the first quarter, eBay generated profits of $21m, compared to Amazon which reported a net loss of $49m.

EBay has a very different model to Amazon, relying on auctions – rather than straight sales – of a wide variety of goods.