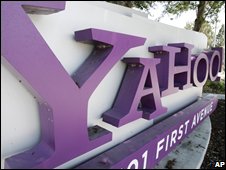 Yahoo has reported a loss in the final three months of 2008 as the economic downturn hit sales of online ads.

It reported a loss of $303 million compared to a profit of $205 million last year.

The results come as Carol Bartz takes over from Jerry Yang as the firm’s new chief executive.

Some analysts feel Yahoo has weathered the downturn better than expected, with the loss mainly due to one-off costs.

We don’t think so. The downturn is far from over, and Yahoo will see a very aggressive Google in the coming months, because Google is also facing pressure on their revenues.

Yahoo has a similar global people reach as Google, of about 450 million people, or 30% of global Internet user base, but the lack of revenue producing assets makes the difference. Yahoo has no strong answer to Google Adwords even today after 3 years.

Yahoo does have a few strong assets:

But on the advertising side, Yahoo has difficult times ahead as Google continues to eat into its user base worldwide — both English and non-English. Their ad network doesn’t work anywhere near Google’s quality, and that explains the lower revenues.

Yahoo has to make some hard decisions on revenue generation and partnerships.