Japan’s marking a tragic anniversary today – 70 years ago an atomic bomb was dropped by US forces on Hiroshima. Tens of thousands attended a solemn ceremony in the city’s Peace Park near the epicentre of the attack and observed a minute’s silence. The bombing of Hiroshima and then of Nagasaki led Japan to surrender in WWII, but it cost tens of thousands of lives. Read More: http://on.rt.com/6oin 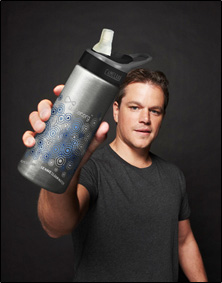 Most Americans and Europeans have easy 24×7 access to clean water and can drink as muchand whenever they feel like. But for 750 million people around the world, purified/clean water is a luxury. Women and young girls in low-income countries walk about 3.7 miles each day to collect water – a total of 40 billion hours a year. Every year poor children miss nearly 440 million school days because of water scarcity. That’s why Matt Damon and Gary White co-founded Water.org, a nonprofit dedicated to providing clean water to impoverished families and individuals living in Africa and Asia. END_OF_DOCUMENT_TOKEN_TO_BE_REPLACED

As is often the case with any form of government, there are only so many resources to go around, especially in a country as large and diverse as the United States of America. Naturally, in a country where the government determines where and how its resources are divided amongst the many causes and interests of its people, there are various special interest groups and corporations that try to influence the government in its decision-making. This process is known as lobbying, and for better or worse, it plays a major role in American politics.

Controversial in nature, lobbying is typically carried out by well-connected advocates, lawyers, or ex-government officials, who are paid to use their influence with politicians and other public officials to sway political favor one way or another. The connections these lobbyists have with said bureaucrats is often of a very personal nature, and in some cases these relationships span the course of several years or decades, if not their entire life. END_OF_DOCUMENT_TOKEN_TO_BE_REPLACED

In business, advertising is often critical to success and companies will go great lengths to promote their product(s) or service(s). These days, no matter where consumers are, advertisements are everywhere. From billboards to buses and even their own phones, consumers are constantly barraged by advertisements, whether they like it or not. With the dawn of social media in an age of information, companies have found ways to incorporate themselves into consumers’ very lives, with their incessant need to promote as strong as ever. END_OF_DOCUMENT_TOKEN_TO_BE_REPLACED